Open to the Public:

We're a very pleasant and scenic drive through the hills and hollers of McDonald County, Missouri. Just north of Pea Ridge, Arkansas

We realize it can be a bit of an adventure to find us the first time,
so we've made this handy printable map with directions to guide your journey 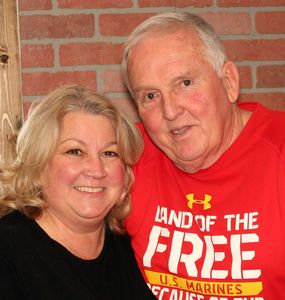 Dark Hills Brewery was established in 2004 and in November 2017 began production in their own dedicated gluten-free brewhouse at the Whistling Springs Brewing Company in rural southwest Missouri, just a few miles north of Pea Ridge, Arkansas.

Leigh Nogy opened her brewery for the love of sharing craft beer and other beverages with those who suffer from gluten intolerance - Celiac disease..

The brew staff at Dark Hills Brewery have worked for more than a decade creating gluten free versions of some of the beer world's most popular offerings. At this time they have a line of beers including a summer lemon radler, a maple porter, and a traditional amber along with several others. As of July 2019, Dark Hills Brewery holds two Gold Medals in the gluten-free beer division and 1 bronze in the non-alcoholic root beer division at the United States Open Beer Championship.

In the winter of 2017, Richard Davis, the owner of Whistling Springs Brewing Company, and his wife Pam brought in the brewing crew behind the gluten-free Dark Hills Brewery: Brewmistress - Leigh Nogy, Brewery Engineer - Chris Nogy, and Brew Monkey - Bruce Arnold, to brew gluten-free beverages in a dedicated gluten-free brewhouse on this picturesque Ozark farm. The team also does double duty, brewing traditional beers in the Whistling Springs brewhouse brewery.


You will find our focus on creativity, experimentation, and the unique involvement of the patrons in the process of creating new beers an experience you have not found anywhere else.


This is something you have to see - and taste - firsthand to appreciate.
We invite you to come visit and see for yourself...


We've expanded! Come enjoy our larger indoor seating area, and check out the views from our outside tables and firepit.

SAFE RIDES NOW AVAILABLE!
Call or text today to schedule your pickup for this weekend: 479-531-1186

The drive is so scenic,
our location is so picturesque,
and our beers are SO GOOD,


it's all worth the trip!